The Upstart Guide to Owning and Managing a Restaurant 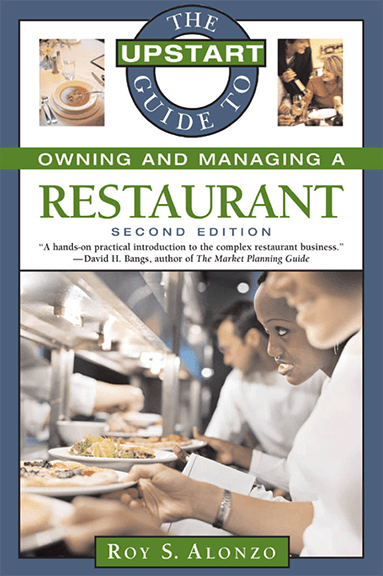 The Upstart Guide to Owning and Managing a Restaurant

The purpose of this book is to give you a sense of what the restau- rant business is like, make you aware of what is required to enter it, and help you evaluate whether it is the right business for you. It is also intended to acquaint you with a logical course of action for starting up a restaurant, should you decide to enter the business, and to give you insights and techniques for operating a restaurant successfully. It covers the spectrum from the initial idea to the grand opening and beyond.

Dining out is an integral part of the American lifestyle. We eat out not just because we’re hungry but also for entertainment, relaxation, to socialize, to avoid cooking at home, and sometimes to conduct busi- ness. It is convenient and fits well into our faster paced 21st century lifestyles. But it wasn’t always this way.

Historically, the concept of a restaurant, as we know it, is a rela- tively recent one. It is asserted by some that the first restaurant in Europe was the Champ d’Oiseau, started by a chef named Boulanger in Paris in 1765. Others claim that the honor goes to another Parisian public eating house, La Tour d’Argent, opened in 1533. Whatever the case, it was not until after the French Revolution, in 1789, that the concept of a restaurant began to spread. Prominent chefs, once employed by the deposed wealthy, found themselves out of work, and the more enterprising ones opened establishments to feed the public.

Prior to the 1700s, the only places where ordinary people could obtain a prepared meal for a fixed price in England were inns and taverns, also called ordinaries. The meals were not of the customer’s choice, and their price included a fee for lodging, which had to be paid whether or not the diner slept there.