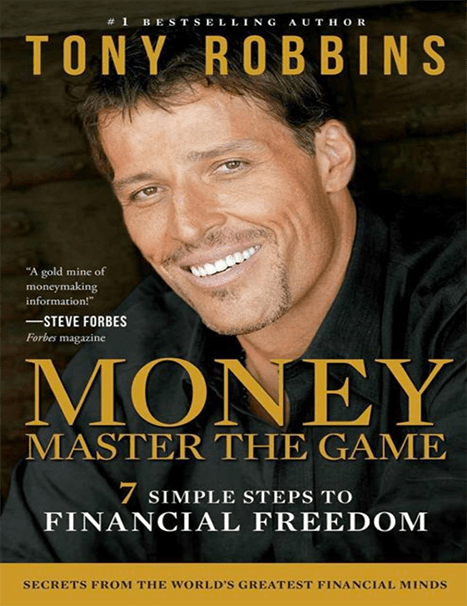 Like all great adventurers, we’ll start by getting oriented for the trip. In chapter 1.4, you’ll learn more about the psychology of wealth, what holds us back, and some simple cures. You’ll uncover what it is you’re really investing for, and unleash the power of the best financial breakthrough strategies. Then, in the next chapter, we blast off. Here you’ll take the first of the 7 Simple Steps and make the most important financial decision of your life. This chapter is a must read.

As a former litigator with years of experience working around Wall Street firms, it’s fair to say that a few liars, crooks, and con artists have crossed my path. Since both the legal and financial fields cultivate their share of professional hustlers, I’ve learned to quickly separate the good actors from the bad.

I am also a skeptic by nature. So when Tony Robbins sought me out for this project because of the company I founded in 2007, HighTower, I was curious but wary. Is there really anything new to say about personal finance and investing? And is Tony Robbins the man to say it?

I was, of course, aware of Tony’s tremendous reputation as America’s number one life and business strategist. And like many, I knew that he has worked with everyone from US presidents to billionaire entrepreneurs, transforming their personal and professional lives along the way.

But what I didn’t know until we met was that Tony Robbins is the real thing. The man lives up to the hype of the brand. His authenticity was evident, and his passion was contagious. Rather than rehash the sins of the financial industry, Tony came to this project with the goal of democratizing financial services and offering tactics and solutions that had previously been appreciated and used by only the wealthiest investors.

Tony and I hit it off right away because we share a mission of helping empower people to make better, more informed financial decisions. That’s the heart of my company, and it’s what drives me personally. While the financial crisis of 2008 brought to light the conflicts and injustices inherent in the financial system, few people could come up with real-world, practical solutions that would actually make a difference for individuals and families.

Why? Because there’s an inherent conflict in the system. The largest financial institutions are set up to make a profit for themselves, not their clients. Investors may think they are paying fees for high-quality, unbiased advice. Instead, they are all too often paying for the privilege of being offered a small sample of “suitable” investment products and services that are in constant conflict with improving the firm’s bottom line.

HighTower is a solution to these problems, and that’s why Tony originally came to interview me for this book. We offer only investment advice, and we have a platform of leading technology, products, and solutions that meet advisors’ and investors’ needs. We do not engage in the many toxic activities that create conflicts of interest within the major banks. We brought together some of the nation’s best financial advisors. Simply put, we built a better model for transparent financial advice.

Tony’s mission is to organize and bring to the masses the most honest and practical financial solutions—some of them are even “secrets.” He understands that people need more than knowledge—they need a clear road map to a financially secure future.

The guidance provided within these pages is the result of unprecedented access to the leading minds in the financial world. I don’t know of anyone other than Tony who could pull off such a feat. Only Tony, with his wide range of client relationships, his contagious enthusiasm, and his unrelenting passion could have convinced these individuals—among the best in the industry—to share their knowledge and experience.

Like me, these people trust Tony to capture their thinking and simplify it for a broad audience. And because Tony’s passion lies in empowering people, he is able to take these conversations from theory to reality, offering tools that nearly anyone can use to improve his or her financial situation.

Tony challenged me to look at the solutions we had created for wealthy investors and figure out a way to make them available and applicable to the general public. I’m proud to say that we are deeply engaged in a variety of projects, and we are excited about the positive impact that together we will have on so many people.

True to his calling, Tony is using this book to empower individual investors while simultaneously helping those who have slipped through the cracks or been left behind by society. While two-thirds of Americans are concerned they won’t have enough to retire, two million people have lost access to food stamps in the past year. Many of these individuals don’t know where their next meal will come from.

Tony has stepped in to help fill the gap. He’s spoken openly about his own experience with homelessness and hunger, and is committed to improving the lives of these often-forgotten populations. Tony is personally committed to feeding 50 million people this year, and is working to double that effort—feeding 100 million people—through matching contributions for next year and in the years ahead.

Tony has also partnered with Simon & Schuster to donate copies of his bestselling guide Notes from a Friend: A Quick and Simple Guide to Taking Charge of Your Life to those who are in need and just starting to embark on a new path of empowerment. His goal is to feed minds and bodies.

I am honored, humbled, and grateful to be a part of this project and eager to see the change we can enact together. I’m excited for you, the reader. You’re about to meet the force of nature that is Tony Robbins and go on a journey that will truly be life changing.

Few words have the power to provoke such extreme human emotions. A lot of us refuse to even talk about money! Like religion, sex, or politics, the topic is taboo at the dinner table and often off-limits in the workplace. We might discuss wealth in polite company, but money is explicit. It’s raw. It’s garish. It’s intensely personal and highly charged. It can make people feel guilty when they have it—or ashamed when they don’t. But what does it really mean?

For some of us, money is vital and crucial but not paramount. It’s simply a tool, a source of power used in service of others and a life well lived. Others are consumed with such a hunger for money that it destroys them and everyone around them. Some are even willing to give up things that are far more valuable to get it: their health, their time, their family, their selfworth, and, in some cases, even their integrity.

At its core, money is about power.

We’ve all seen how money can have the power to create or the power to destroy. It can fund a dream or start a war. You can provide money as a gift or wield it as a weapon. It can be used as an expression of your spirit, your creativity, your ideas—or your frustration, your anger, your hate. It can be used to influence governments and individuals. Some marry for it—and then find out its real price.

But we all know that on some level it’s an illusion. Money isn’t even gold or paper today, it’s zeros and ones in banking computers. What is it? It’s like a shape-shifter or a canvas, assuming whatever meaning or emotion we project on it.

The Interpretation of Financial Statements