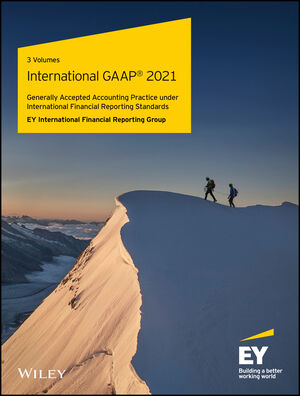 The content of this book takes into account all accounting standards and other relevant rules issued up to September 2020. Consequently, it covers the IASB’s Conceptual Framework for Financial Reporting and authoritative literature listed below.

References in the main text of each chapter to the pronouncements below are generally to the versions of those pronouncements as approved and expected to be included in the Blue Book edition of the Bound Volume 2020 International Financial Reporting Standards – IFRS – Consolidated without early application – Official pronouncements applicable on 1 January 2021, to be published by the IASB.


Although the convergence of IFRS and US GAAP continues, differences remain between the two systems of standards. Let's consider the most important of them at the end of 2020.

The process of active convergence of the IFRS and US GAAP reporting systems began in the mid-2000s, but later the joint project of the IASB and FASB was suspended due to some disagreements.

It is now 2021, and although IFRS is being adopted more and more as a single global system of standards, US GAAP still exists and is used successfully. Therefore, accountants of international companies still face a daunting task when they need to prepare two different sets of statements.

Nevertheless, the process of convergence between US GAAP and IFRS continues, and to date, some results are visible.

Significant reforms to IFRS and US GAAP in recent years. Since 2014, the IASB and the American Financial Accounting Standards Board (FASB) have issued a number of new standards covering the main areas of accounting:

While most of these new developments have brought US GAAP and IFRS closer together, some new differences have emerged.

In addition, it appears that the IASB and the FASB have decided to set different dates for the adoption of the standards.

While, under IFRS, all new major changes are already mandatory and have entered into force (except for insurance - you need to wait until 2023), the FASB has postponed the effective dates for many companies, which in practice means that within several years companies can report both under the new IFRS and under the old US GAAP.

As a result, US GAAP financial statements can be very different from IFRS statements.

However, one of the main areas - revenue recognition - is harmonized between the two systems, so at least that's good news!

IFRS does NOT prescribe a single format for presenting a balance sheet (statement of financial position), income statement, statement of changes in equity, etc.

Instead, you should develop a format that best suits your company, depending on the nature of its business.

US GAAP also does not prescribe the format - with one exception. If the company is public, it must comply with the financial reporting format prescribed by Regulation S-X (Regulation S-X).

IFRS prescribes 5 components of financial statements that make up a complete set:

As we all know, IFRS requires comparative information for the previous reporting period.

So, you need to submit two statements of financial position and other statements.

And, if you have changed accounting policies or corrected material errors, you will need to present even three statements of financial position, including the statement at the beginning of the earliest comparative period.

But this is not required under US GAAP.

However, a third balance sheet (with retrospective adjustment) is not required under US GAAP under any circumstances.

The concept of fair value measurement is applied in both IFRS and US GAAP, so both of these systems have one specific standard regarding fair value:

Perhaps one significant difference is that US GAAP permits the use of net worth instead of fair value for certain types of investments (for example, certain stakes in private equity funds).

The rest of the differences lie rather in the assessment rules prescribed by other standards.

As mentioned above, lease accounting is one of the main areas of accounting that has undergone revisions in both IFRS and US GAAP in recent years.

The new lease standard IFRS 16 was issued in January 2016, and its analogue ASC 842 was issued a month later, in February 2016. Later, both standards were amended.

he IASB reported, in 2018, that 144 of the 166 jurisdictions they have researched require the use of IFRS for all or most domestic publicly accountable entities (listed companies and financial institutions) in their capital markets, and a further 12 jurisdictions permit the use of IFRS. Several large economies such as China, India and Japan do not require IFRS for all or most of their listed companies, but they have made considerable progress to move towards or to converge with IFRS. The United States is the only major economy that is unlikely to allow publicly listed domestic companies to apply IFRS in the near term.

Maintaining the current degree of international convergence of accounting standards requires an ongoing commitment on the part of all jurisdictions involved. This cannot be taken for granted given the increasing desire around the world to bring back control from the international to the national or regional level. In this context it is positive to note, for example, that the Summary Report of the Public Consultation on the Fitness Check on the EU framework for public reporting by companies found that ‘[a] majority of respondents supported the status quo as regards the EU IFRS endorsement process, and cautioned against “EU carve-ins” that could lead to “EU-IFRSs”, a situation that could be detrimental to EU companies active globally and to foreign investments into the EU.’ However, there is a minority that argues in favour of the ability to selectively modify standards as they believe this would increase the ability to influence the IASB’s standard-setting process. In our view, allowing IFRS to devolve into local flavours, in the hope of broader acceptance, would reduce the existing benefits in terms of cost, quality and clarity of international financial reporting in exchange for an uncertain future without a clear mechanism for longer-term convergence.

IFRS 9 – Financial Instruments – and IFRS 15 – Revenue from Contracts with Customers, which became effective in 2018, have improved the quality of financial reporting, but their requirements are at times complex. In the past two years, the IFRS Interpretations Committee has published more than a dozen agenda decisions on these standards and, at the time of writing, are considering several more.

While the IASB is starting to prepare for its 2020 Agenda Consultation, it is currently working on the projects in its work plan for the period from 2017 until 2021. The work plan can be divided into three elements: the standard-setting and maintenance projects, the research projects, and the Better Communication in Financial Reporting initiative. Constituents will welcome the fact that a period of relative calm has arrived once they have adopted IFRS 16; the IASB’s standard-setting and maintenance agenda is not dominated by a series of ambitious and major new standards, but almost exclusively focuses on narrow scope projects that address certain aspects of existing standards. The rate-regulated activities project, which aims to develop a new accounting model that deals with a company's incremental rights and obligations arising from its rate-regulated activities, is a more comprehensive project but limited in impact as it is industry-specific.

As part of its active research agenda, the IASB’s core model for dynamic risk management is expected in late 2019, while the discussion papers on business combinations under common control, and goodwill and impairment are now expected in 2020. The IASB has also received feedback on last year’s discussion paper on financial instruments with characteristics of equity and is currently considering the future direction of the project. We encourage the IASB to continue its work on these technically complex but important projects as they deal with issues that have been the source of many accounting questions. In particular, any improvements and simplifications that may follow from the project on goodwill and impairment would be appreciated by preparers, users and auditors alike.

The IASB continues to work on the various aspects of its Better Communication in Financial Reporting initiative, such as the primary financial statements, management commentary and the taxonomy. The project to update the Management Commentary Practice Statement is especially important as the IASB sees this as the cornerstone of the notion of ‘broader financial information’.

Well, the "International GAAP 2020 2021"" PDF is not the easiest one to read, neither it`s a simplest one to understand. Although, it`s a MUST!

Got a kindle version of International GAAP 2020 2021. Well-readable and even thrilling - to the extent a business book can be so. Kudos to Jeremy Barnes!

WOW. "International GAAP 2020 2021"" is a really good one on this topic. Honestly, haven`t read any other books from Jeremy Barnes, but he seems to be real genius!